What (Not) to Wear 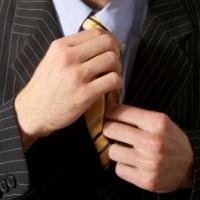 If television sitcoms of the 1980s and 1990s are to be believed, every parent in America argued with a teenager who wanted to wear ripped jeans and ill-fitting shirts to school. These shows also implied that the youth of America ran around speaking like Valley Girls and using slang no one over 17 understood.

I thought these fashion battles were dramatized TV nonsense and never happened in real households.

Judging by the amount of inappropriate attire job seekers wear to interviews and employees wear to work, many adults are taking advantage of the freedom to wear whatever they choose. And some of them seem to be wearing the exact clothes their parents disapproved of more than a decade (or two) ago.

Interview attire
The first opportunity you and your wardrobe have to impress an employer is during the interview stage. Unfortunately, this initial meeting is the one where you have the least amount of information with which to prepare. At this stage, you probably haven’t been to the company before and don’t know the specifics of the dress code and office culture.

How should you prepare? Better to overdress a little than underdress, says Marianne Hancock, account supervisor for public relations firm Golin Harris.

“Our office is pretty casual and is a creative setting, but an interviewee wouldn’t know that coming in,” Hancock says. “I expect business attire, preferably a suit. I want the interviewee to look like they mean business and are mature enough to handle a fast-paced workplace.”

“If they don’t wear their best business attire to an interview, it makes me wonder if they really want the job,” she says. “It is hard to take someone seriously wearing flip-flops, a butterfly sweater set and a white puffy skirt.”

“I think it would be ideal for work to appear to have made an effort, just as you would with your work product,” Roth advises. “Even if [women] wear jeans to work, I would suggest pairing them with a jacket, classic tee or top and a heel. I believe in people showing a little personality at work, so a great color in a shoe, bag or necklace with a classic suit or pants outfit would be not only appropriate but should be encouraged.”

For whatever reason, many new employees still arrive at the first day of work wondering what to wear. Research is your best friend, says Louise Lamorte, the director of career services at La Salle University in Philadelphia.

“[Candidates] should be observant of employees’ dress during on-site interviews,” Lamorte recommends. “It is also good practice and appropriate for new employees to ask the HR department or immediate supervisor about the company dress code before the first day of work, especially in these days of business professional, business casual and dress down styles.”

Dos and don’ts
So what are you supposed to wear? You’ve got some employers wanting you to dress a little better than the code for interviews, but if you overdress you appear ignorant of the culture.

While no strict universal rules exist for dress code, there are some guidelines you can think about when dressing for interviews and work:

· Know your audience
Whether you’re dressing for an interview or just a Tuesday on the job, you want to show that you fit in. Jeans and a T-shirt won’t work for a lot of industries, but a suit and tie might not work for others. Look at the industry and the workplace and take cues from other people.

· Don’t get lazy
Once you’ve been on a job long enough, you can be tempted to throw on whatever’s clean (or clean enough) and stumble to work. Employers don’t stop assessing your work ethic once you pass your first-year anniversary. Your appearance is a constant factor in how others perceive you and your professionalism.

· Use common sense
In most circumstances, you can be certain that the kind of clothes you’d wear to a club or the beach don’t translate to the workplace. Torn or extremely faded jeans, shirts that show a lot of skin, flip-flops, t-shirts with skulls on them, ragged tennis shoes and purple hair don’t belong in workplaces. Of course, if you work on the beach or in a club, you probably can wear some of these things.

· Read the dress code
If your company has an official dress code in its employee handbook, read it. Maybe everyone in the company bends the rules, and that’s fine, but you should be aware of what the official guidelines are in case you ever have to deal with a complaint.

· Dress for the position you want
Yes, it’s a cliché, but it’s a cliché for a reason. Dressing for the position you want and not the one you have is a good way to make a strong impression on your boss and clients or customers. If you want to be the manager and notice that everyone at that level has a more sophisticated look than yours, emulate them.

Source: www.CareerBuilder.com
Anthony Balderrama is a writer and blogger for CareerBuilder.com and its job blog, The Work Buzz. He researches and writes about job search strategy, career management, hiring trends and workplace issues.